Nemea, which took its name from the nymph of the same name, the daughter of the river god Asopus, is considered to be one of the most sacred places in Greece. Its history gets lost in the depths of time and archaeological findings show that it has been inhabited since prehistoric times.

The Nemean games became known from the famed labor of Heracles: the killing of the fearsome lion that terrorized the region.

In this small plain irrigated by the river Asopus and a large area of the surrounding hills, the cultivation of vines has a tradition of thousands of years, especially the variety of grapes known as agiorgitiko which thrive in the area and borrowed their name from the settlement Aghios Georgios, the name by which Nemea was known at the beginning of the 20th century.

The Nemean wines have a distinctive, deep, ruby-red color and a pleasant spicy aroma and a light, fine taste, considered to be of the best of the Peloponnese. Each year in Nemea a wine festival is organized, with local wine producers taking part. Visitors have the opportunity to enjoy a rich cultural program, tasting all the bottled varieties. 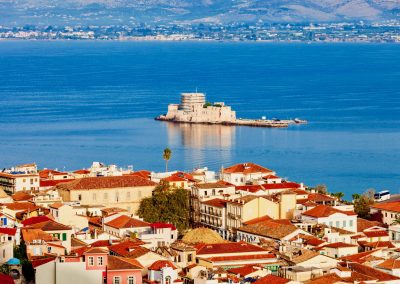